On Friday night, six artists with strong local ties will reunite for an exhibition of their works titled The Road Home.

Fifteen years has passed since their last collaboration – an exhibition titled 25kms from the Meridian – held in an empty shopfront in Conadilly Street in 2000.

The concept was developed by locals Maree Kelly and Emily Simson who were in their final year of a fine arts degree at Newcastle University.

Mrs Kelly said they came up with the idea when they had to complete a self-directed study module as part of the degree.

“We wanted to have an art space that was in regional country, not the city,” she said.

“There wasn’t a whole lot happening in art.”

Both painters, the women decided to ask four other artists if they would come on board – school friends and sculptors Jody Pawley and Tanya Bartlett, and established printmakers Pat Rowley and Anne Knight.

“We were sort of at the beginning of our careers; emerging artists,” Mrs Kelly said.

Gunnedah was experiencing economical difficulties in 2000, according to Mrs Kelly, so the temporary exhibition was a welcome surprise for the community.

“I think it perked people up. Everyone started to look at art again,” she said.

“A lot of good things happened from it.”

Printmaker Pat Rowley said it was a time when people needed something and it seemed to make a big impact on the town.

The success of the exhibition led to the opening of an artists’ space at the Creative Arts Gallery a year later through Two Rivers Art Council, according to Mrs Kelly.

Mrs Kelly said the six artists’ newest exhibition was the result of a conversation she had with Pip Murray who had attended their first exhibition.

The two women were reminiscing and decided to get the artists back together again.

“It’s lovely to see works I haven’t seen before.”

Around 70 works will be displayed at the Work of Art Community Gallery until early November. The official opening will take place tomorrow night at 6pm. 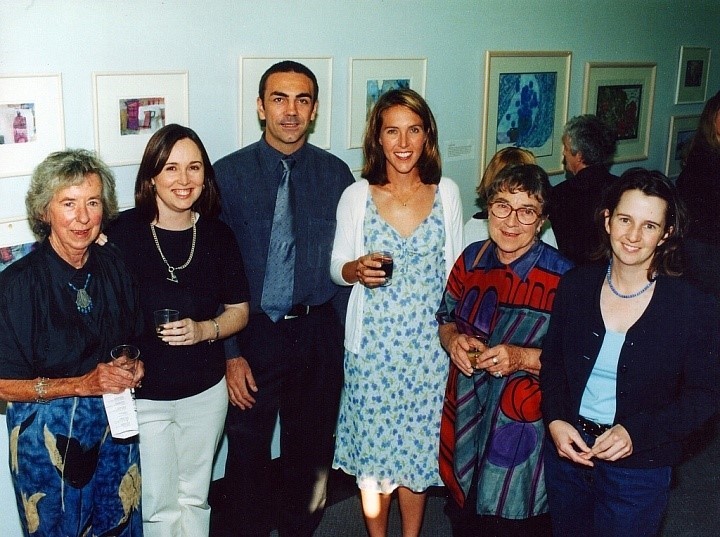 From the ’25kms from the Meridian’ exhibition, temporary space, Gunnedah in 2000.