A win at Frost Over Barraba

From the Namoi Valley Independent, 6 July 2018

CONGRATULATIONS to Maree Kelly, winner of the Frost 2018 Regional Australia Bank Best Work of Art prize of $2,500 for “Passing Showers”.

The annual exhibition opened in Barraba last night, with 140 people turning out to see the many works on display in pottery, painting, sculpture, printmaking, pastels, drawings, pottery and photography.

Winning works from Gunnedah included Passing Showers by Maree Kelly, Lady in the Forest by Julie Laurie and Portrait of Man by youngster Julian Heath.

Maree Kelly received $2500 and the title of Best Work of Art for her oil painting depicting a green landscape. Julie Laurie won Best Sculpture and $350 for her wire work of a woman, and Julian Heath $100 for Best Children’s Artwork.

Mrs Kelly’s work was among almost 200 entries judged by Walcha artist Angus Nivison who said it was a “well-constructed and painted work”.

“It was no easy choice although it was one of only two works considered for this prize – in other words it almost picked itself,” he said.

“In the end, it was it’s sense of place – it took me straight to that grey day, to those passing showers. It has a great sense of peace, of beauty, [and] it celebrates the humbleness of a quiet scene.

“It is not solving the world’s problems, but rather celebrating the quietness of beauty, taking joy in the small moment of time between showers.”

Mrs Kelly said it was lovely to have her work chosen by Mr Nivison.

“Angus is a New England artist I’ve always admired and I’ve followed his career. It was nice to know he liked my work,” she said.

The contemporary landscape artist said she has worn Best Work of Art before but was still “a little bit surprised”.

Passing Showers was painted after “the last good rainfall we had”.

“It’s all green, which is a bit different to now… I wish the landscape looked a bit more like that at the moment,” Mrs Kelly said. 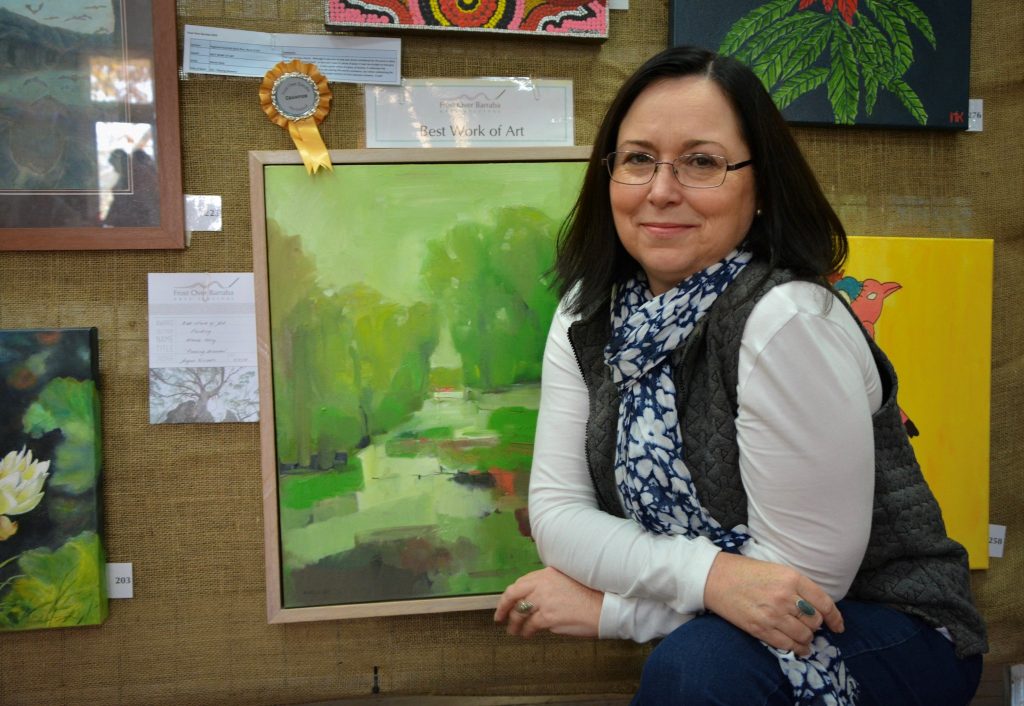